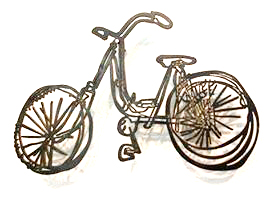 Design inspiration comes in many forms for James Culleton, whether it’s basing a sectional off of the confluence of curves of the Red and the Assiniboine Rivers or creating a heart shaped rocking chair, Culleton loves what he does.

Culleton is multifaceted and he’s a designer who uses his skills as a painter, sculptor, and musician to feed his passion for creativity. Known for his use of blind contour drawing, his work can be seen all over Winnipeg. His public art graces the façade of the West End Cultural Centre. He has published three books of his drawings and teaches design at Red River College in Winnipeg.

Culleton graduated from Fine Arts at the University of Manitoba in 1998 and was hired as a designer by Palliser Furniture shortly after, assuming the role of Design Director. His furniture designs appear all over North America in stores such as JCPenney, Eq3, I/O Metro, Germaine Lariviere, Tanguay, Dufresne and the CDG Group. He has won awards from the Conseil des arts et des lettres du Quebec, EQ3’s Generation Art from the Michaelle Jean Foundation, and most recently he won a Pinnacle award from The American Society of Furniture Designers.