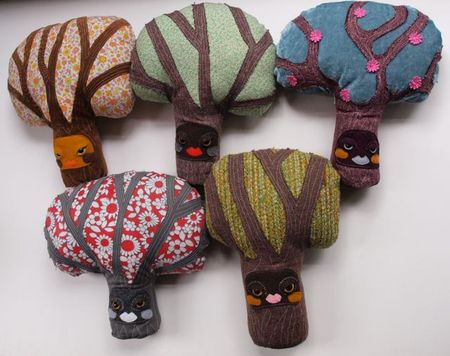 Hands create as nature does in steady motions through changing times, growing, sustaining skills, covering surfaces. As weeds poke through the cracks in pavement, the act of crafting and making find ways to work its threads into all aspects of my life. The slow process of hand stitching connects me to the object I am making and its permanence as an object of importance, regardless of its function.I create comforting objects consisting of smooth lines and soft textures as a response to the jagged lines and cold plastics and metals of mass produced toys and environments. I like to make things one at a time, emphasizing the uniqueness and personality of each piece.Kami Goertz is a local art maker who has been making plush creatures under the name marathon1981 since 2008. Her work has been featured in three issues of “Stuffed Magazine: The Crafting of Softies”, Seattle’s international show “Plush You” in 2011 and 2012, as well as the “Luv-able Hug-able” show in New York City 2011. Kami’s plush work can be found in shops in Nelson B.C, Innisfail Alberta, Winnipeg and Brandon as well as a few local craft shows throughout the year in downtown Winnipeg.When she is not at the sewing machine Kami has a full time day job, is a mother of one and partner to a local musician, printmaker at Martha Street Studio and addicted thrifter.