A lecture with Breanne Reinfort

“Inuit art” often conjures images such as stunning soapstone carvings and vivid prints of Arctic animals. Since the mid 20th century, the talents and creativity of so many Inuit artists have obtained nationwide, if not worldwide acclaim. On a much smaller scale – at the regional, local, and even personal level – Inuit arts and crafts also thrive, sometimes in the most ordinary of settings away from the spotlight in the form of clothing, footwear, jewelry, tools, dolls, and even tea cozies.

Stories that are told through these arts share lessons about where to obtain the best materials or when to harvest an animal for the proper fur; they hold teachings of how to make the right stitch or how hard to press down on a blade; they incorporate oral history about colonization, harvesting practices, or animal population dynamics. More recently, these arts involve individuals reconnecting to their culture, their land, their food, and their identity.

From the experiences, environments, and stories that serve as inspiration, to the acquisition and preparation of materials and skilled (or beginner) techniques used, you are invited to join in an exploration of everyday Inuit art and have an opportunity to get up close with some examples from Reinfort’s personal collection of unique craftsmanship. 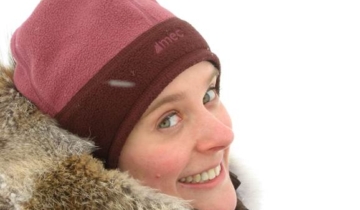 After obtaining a Bachelor of Science in Zoology from the University of Manitoba, Breanne’s research interests veered North, taking her to study in Pangnirtung, NU and Churchill, MB. She received a Master of Environment (U of M) in knowledge translation through her work with the community of Sachs Harbour, NT. Many of Breanne’s non-research hours in the community were spent drinking lots of tea and eating country food while learning to sew and prepare hides.

During her tenure at the University of Manitoba’s Centre for Earth Observation Science, she assisted in coordinating an Integrated Regional Impact Study of the Northwest Territories and Nunavut’s Kitikmeot Region and was the proposal coordinator for research examining microbial genomics for oil spill preparedness and bioremediation in Canada’s Arctic marine environment, which is currently taking place at the Churchill Marine Observatory.

She currently works at FortWhyte Alive.