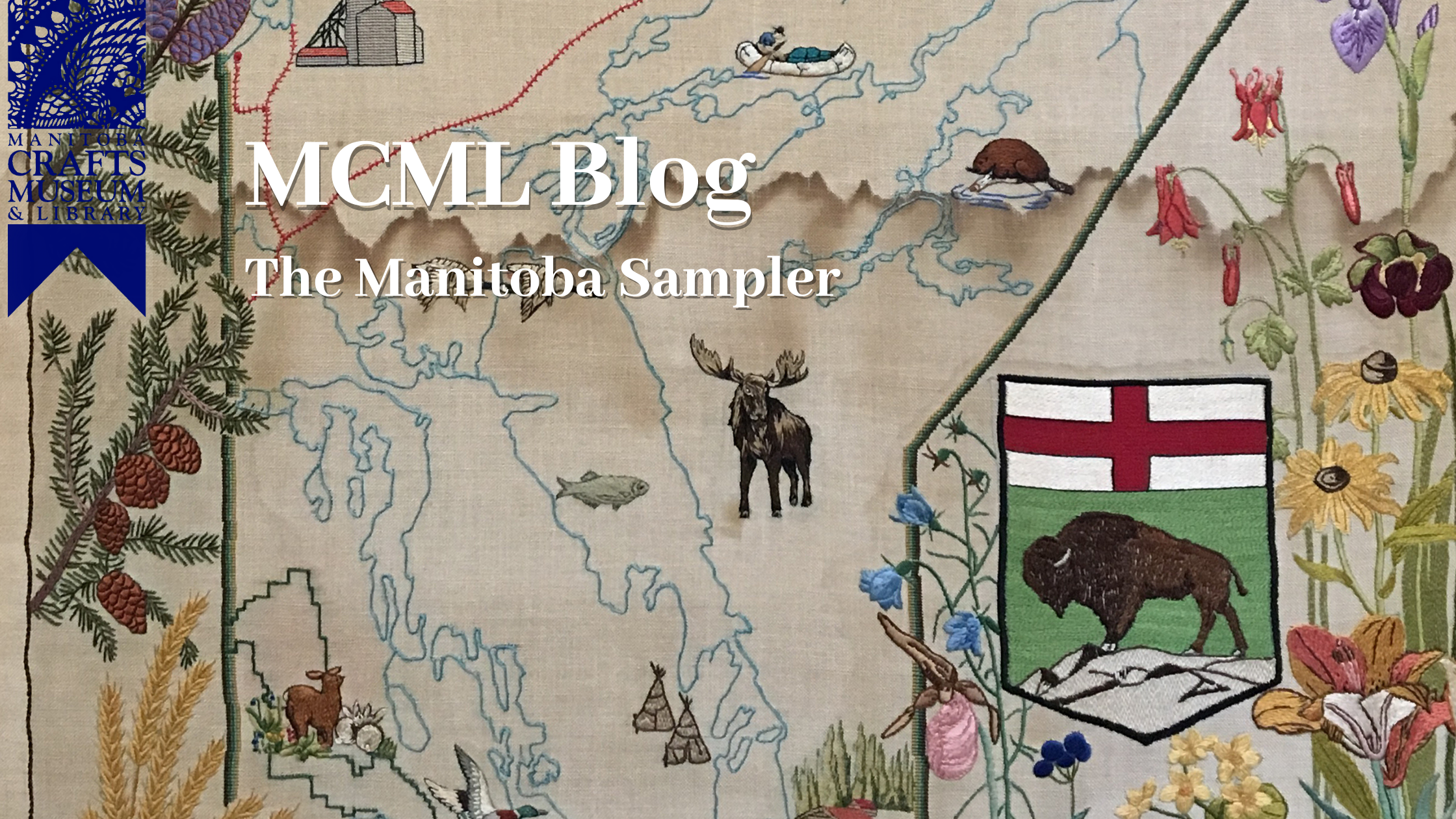 Since Manitoba joined confederation 150 years ago, a variety of symbols have been selected to officially represent the province, ranging from the White Spruce to the Walleye to the Big Bluestem Grass. Many of these emblems hold a great potential to be used as motifs in craft- the MCML collection holds a variety of prairie crocus, wheat sheaf and bison themed items – but how much do we really know about these symbols?

When presented with the opportunity to design a sampler to represent the province in a 1945 national needlework exhibition, members of the Crafts Guild of Manitoba stitched together a piece of art that wonderfully encompasses many of these images in a way that highlights the natural wonders of Manitoba. The Manitoba Sampler, a stunning work of crewel and counted embroidery, takes the form of a map with various Manitoban motifs appearing in their respective regions. To celebrate Manitoba 150, let us explore this map to discover more about some of the symbols that the Craft Guild chose to represent Manitoba!

To border the province, the sampler depicts various official provincial plants, including the hardy White Spruce that Manitobans have the gift of being surrounded by throughout much of the province. Opposite to the Spruce is the Prairie Crocus, waving among a cluster of assorted wildflowers, representing the provincial flowers of other provinces. The Crocus has been the Manitoba provincial flower since 1906, and answers to a variety of names, including “the pasque flower” because it grows around Easter time, the “harbinger of spring”, as arrives just after snow melt, and the “windflower”, for its seeds spread due to the blowing spring winds (Nature Alberta)! The Guild also paid homage to the beloved Winnipeg Goldeye, whose image is stitched into the waters of Lake Winnipeg. Although the Goldeye is not the “offishal” swimmer of Manitoba, it is indeed one of the most amiable for many anglers in the province, being especially loved for its taste when smoked (Outdoor Canada).

Grazing about the shores of the same lake is perhaps the most iconic symbol in all of Canada, and a wonder to bear witness to – the mighty moose. Sadly, this part of the sampler brings to light the way that things have changed since its creation in 1945. Although moose continue to be a revered symbol of Canada, their population has decreased by at least 57 percent since the 1960s due to over-hunting, forestry and logging roads that carve into their natural habitat (CPAWS Manitoba). There are things that we can do to help, however, such as supporting the various organizations that exist in the province with the sole purpose of preserving all of the wonderful creatures that call Manitoba home, many of which are depicted on the Sampler!

Canada Geese, a beaver, and a wolf howling at the Northern lights are among the sights that we see as we continue Northwards on the thread of the Manitoba Sampler. Eventually we arrive at Churchill, which is marked by the presence of a fluffy white polar bear and the industrial port sitting on the shore of the Hudson Bay. Although the sampler was designed seventy-five years ago, much of what the Guild chose to represent remains relevant today. The legislative building still stands in Winnipeg, foxes still roam throughout the province, some grain elevators remain standing (although most are no longer in service), and the Plains Bison still remains our most recognizable provincial symbol. 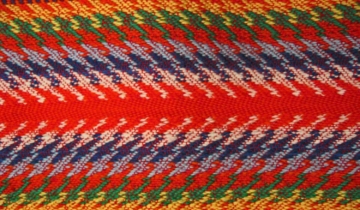 It is interesting to consider what might be included in a hypothetical 2020 version of the Manitoba Sampler. Within the southern region, I would choose to add in an image of the Ceinture Fléchée, or the Voyageur Sash that was originally used by Voyageurs to tie their coats. The finger weaving technique that French Canadians employed to create these sashes was first learned from Indigenous communities, and the sash eventually developed from its use as a utilitarian garment into a status symbol, and is now a symbol that is strongly representative of the Metis, Franco-Manitoban and Indigenous communities of Manitoba (Shipman). Besides the Ceinture Fléchée, I would also love to include the official bird of Manitoba, the Great Grey Owl, whose beauty and wise demeanor I am glad to share a province with.

What symbols would you choose to include to represent the Manitoba that you know?

I believe that it’s important for us to remember all of the wonderful things that Manitoba is home to, for it is all too easy to forget, especially during hard times, about the rich culture and incredible wildlife that dwells nearby! The Manitoba Sampler was created during the last years of World War Two, and surely the Craft Guild of Manitoba sought a similar kind of refuge in these beautiful images that they embroidered. 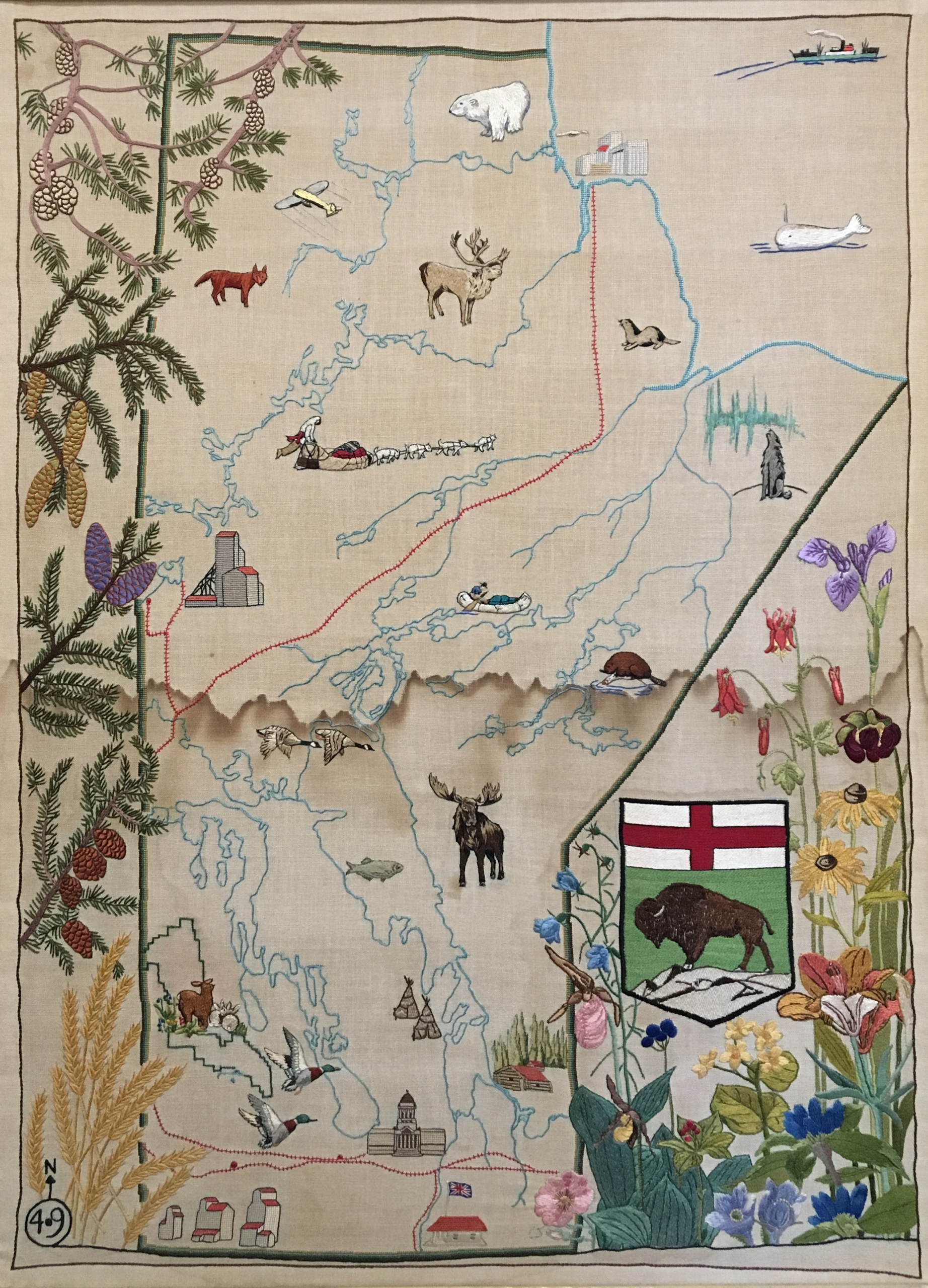