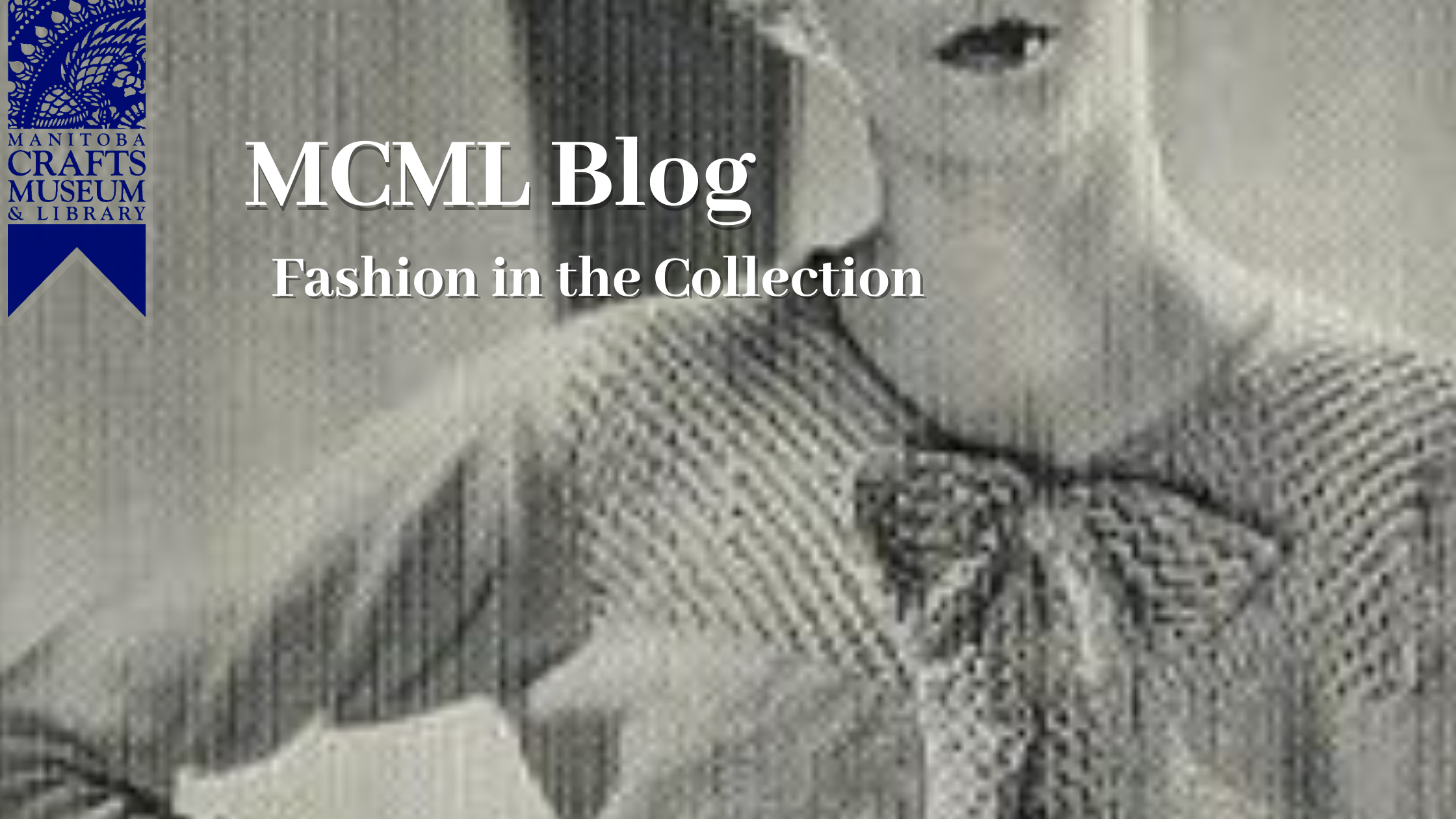 The art of clothes-making is one of the most fundamental and oldest crafts, and so it is no wonder that such a large portion of the MCML’s collection is made up of clothing. Shirts, shawls, shoes and sweaters – a single garment holds so much information about its potential wearer, yet in the realm of historical garments, so much mystery remains. What kind of individual wore such intricate embroidery upon their sleeves? What did they experience in such regalia, or in such delicate lace? And what was their character- what traits did they bring to the garment? Most of these questions go unanswered, however we may guess, and imagine what it would be like to wear them ourselves! They say that style comes back every twenty years, so let us take a pensive look back into the wardrobe of the MCML collection.

To start off this fashion show, here is a little number whose fabric was woven in entirety by Flora Marshall, likely in the 1950’s. Mrs. Marshall made the dress for her daughter, Eleanor, and the fabric was sewn together by “Olga’s Fashions” of Winnipeg. The dress features four lovely green and gold buttons on the front closure, and comes with two belts – one plain, and one with a buckle sewn on the front. The skirt falls in soft pleats that come below the knee, and the cuffs are to be worn turned up with cufflinks for an elegant and refined look. It was likely worn one chillier days, as the material is quite heavy! 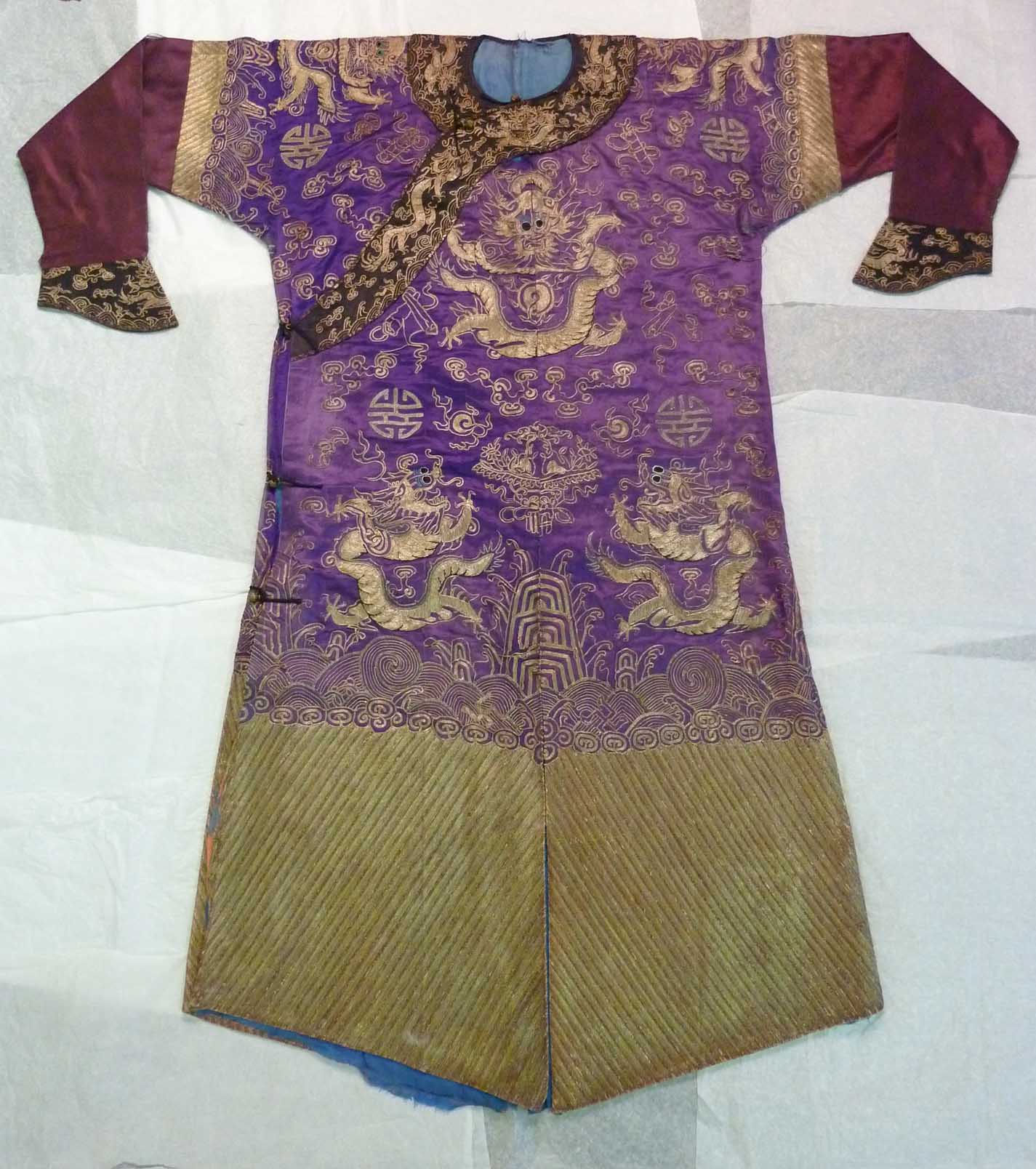 Believe it or not, this next garment belonged to a real prince! This is a “dragon robe”, a formal robe worn by the Chinese emperor, nobles and high ranking officials on important occasions. The wide border on the bottom of the coat incorporates silver and gold stripes which represent the ocean, and three dragons are embroidered upon the purple silk. These are four-clawed dragons, or Mang, which shows that the wearer was in the 4th rank outside of the emporer’s family. Among the other symbols on the robe are pearls, a symbol of luck and good wishes, a Ruyi sceptre for prosperity, musical stones, coins, and scrolls to represent scholarly accomplishment. All of these symbols and more, as well as the general quality of the coat has lead an MCML cataloger to come to the conclusion that indeed this dragon robe “belonged to someone important, but at a time when money was tight in the [Qing] empire”, likely in the late 19th century. 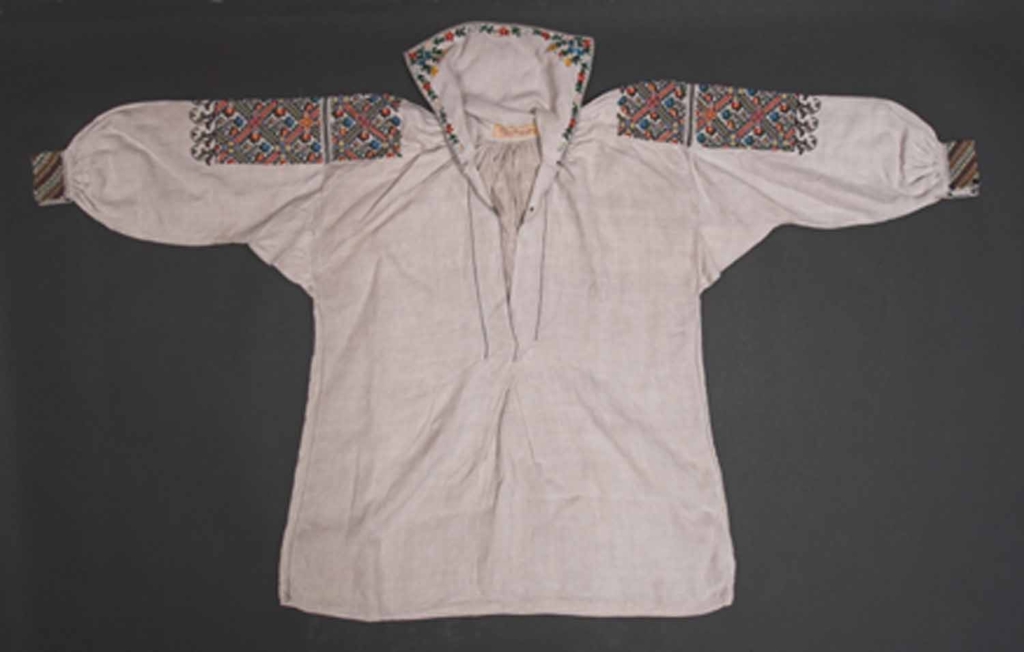 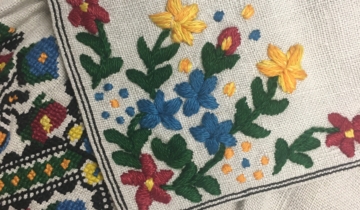 Although the photo hardly does it justice, this stunning sorochka, traditional men’s shirt, is a marvelous example of Ukrainian embroidery. The stylistic elements of the shirt make it clear that it belongs to the ethnographic region of Soka’shchyna. For example, the shirt incorporates a large “sailor-type” collar, wide cuffs, merezhka stitching on the sleeves, colourful embroidery, which are all characteristic of the Sokal region. The embroidery is done in cotton cross-stitching, as well as floral surface embroidery in satin stitch adorning the collar, cuffs and sleeves. The floral motifs include poppies and bachelor’s button, and the material of the shirt is hemp. 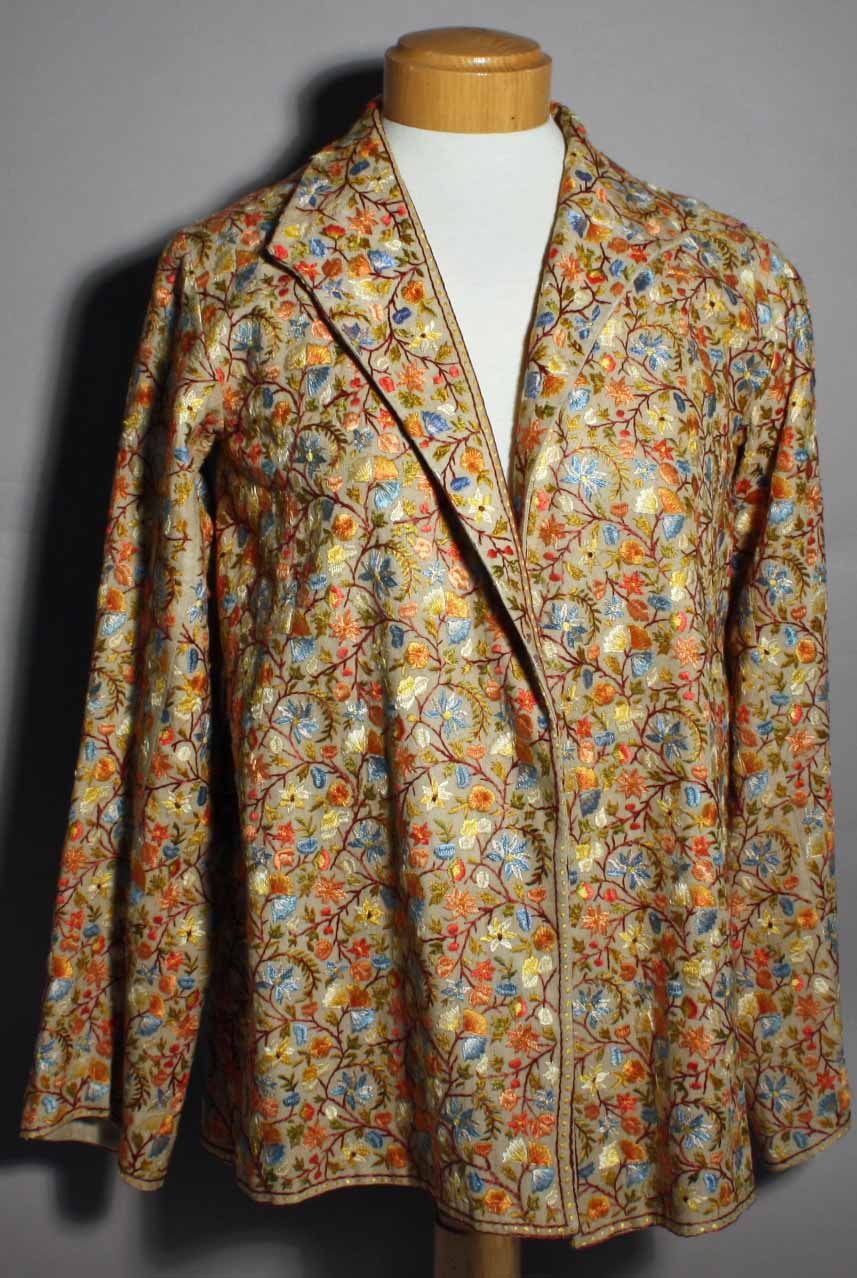 This next garment is all about the embroidery. The floral motifs are done in the Mughal style, and was created in India. The base silk material was hand dyed, and then embroidered by hand, originally as a larger piece of flat cloth which was then tailored into a jacket. The result is an astounding silk cocktail jacket that would surely draw eyes everywhere it went! 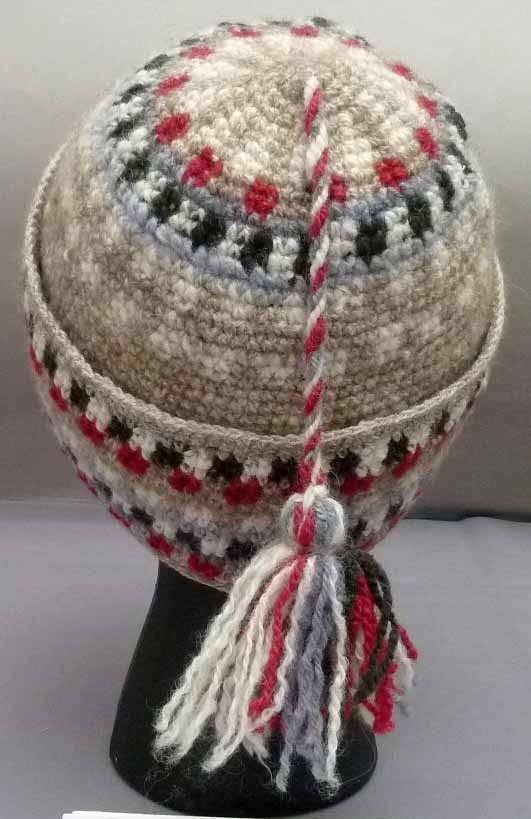 This style of hat is popular in the Eastern Arctic of Canada, and this particular hat was made by Brigitte de March. Often known as Pang hats, they are named after the community of Pangnirtung in Nunavut. Otherwise, it is known by the name Nasak, which translates to “hat” in Inukitut. The tapestry crochet technique employed in this hat is used all over the world to create a very firm fabric with geometric designs. 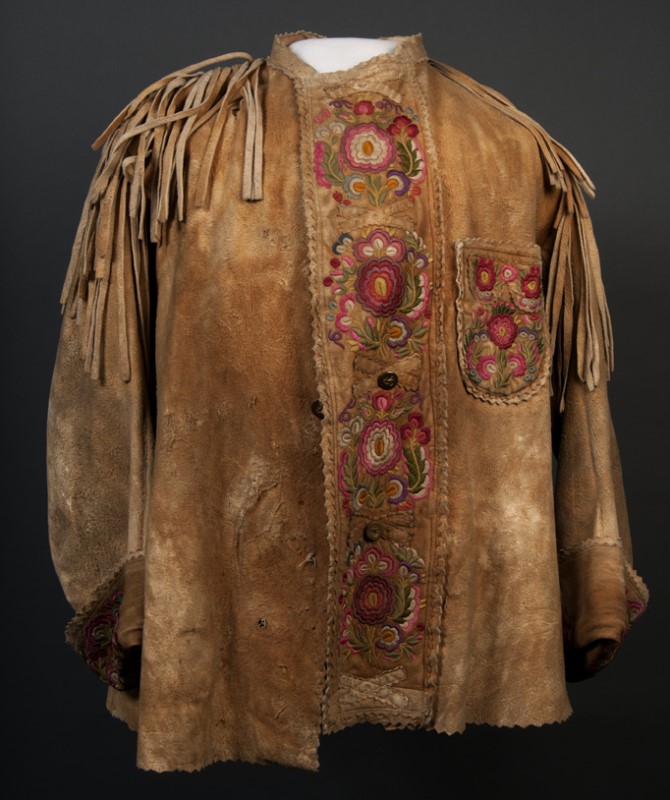 This beautiful leather coat was originally owned and worn by Manitoba artist Eric Bergman. From the shoulder fringes to the intricate crewel embroidery, this coat is an absolute wonder to behold, and it features two decorative brass buttons. The decoration is done in the style of Norway House, and is made with moose skin for durability and warmth.

Although none of these garments are worn anymore, it doesn’t mean that we can’t appreciate them! This is just a small sample of all of the lovely fashions that are held in our collection. Apart from being extremely useful in protecting us from the elements, clothing holds so much power and symbolism, especially when infused with the presence of the wearer. It is evident that quite a few of these garments in the MCML collection have been well-worn, which makes it all the more captivating to admire their hand work, and to imagine what went on in these people’s lives.